Great Pyrennes guard lambs (well some do) read the post, you’ll get the reference

Oh sure, deciding to use the stovetop on the hottest day of the year, without having a ‘freezer burn’ level of air conditioning, might not be the smartest idea, but when you trumped preparing the ground lamb you thawed over the weekend as planned, needed to cook it, stat. It’s bad enough when I forget about fresh produce from the market in the fridge and have to throw it out, but the thought of having to toss 2 lbs of farm fresh ground lamb? Crying jag would ensue.

Without ‘grill man’ (insert husband here) around (yeah I can grill, but don’t like to step on his domain), needed to go with the indoor cooking. So it’s meat. But needs to be cooked fast, elst no air conditioning in the world will cool things down. Hummmm. Got it, keftdes. Say what? Little ‘Greek’ meatballs that are a favorite meze (tapas, appetizer, you get the idea) in Greece, that combine meat (lamb my fav), spices and onion.  All this should take under 10 minutes in a skillet. Yep, that’s bearable on a 95 plus degree day.

(Little secret for those that don’t know me, I LOVE the heat, so maybe even that 10 minutes at the stovetop would be too much for those of you a bit more intolerant of the heat, just sayin’) 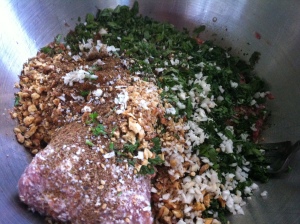 all ingredients ready to be mixed. gone on, get your hands in there.

What started out as straight up keftdes, became a bit more fusion, more of a keftdes meets kofta (middle eastern meatball). Having made them before, but wanting to change it up a bit, I read through a number of recipes. What happened, per usual, is a little bit of this and a little bit of that from a number of recipes, and what resulted is my own version of a Mediterranean-Middle Eastern meatball. Served up with a squeeze of lemon, some homemade tzatziki (the cooling element on the hot day), and a glass of rose -’tis the season after all.

formed meatballs, ready for the skillet 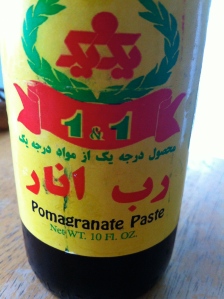 have I been mis-spelling or…

Combine all ingredients (sans the olive oil, pom molasses and lemon wedges) in a large mixing bowl. Don’t be shy, use your hands to really get everything evenly mixed. Back to the hands, form small meatballs, say about 1 1/2 to 2 tablespoons of meat mixture. Once meatballs are all formed, heat some (1-2 tablespoons) of olive oil in a large skillet, over a medium flame. Place meatballs in the skillet, turning them over after about 2-3 minutes. Another 3 minutes and they should be done.

Place on paper towel covered plate to drain oil.  Immediately brush with some pomegranate molasses (shout out to NY Times Dining Guide for that idea). Serve with lemon wedges.