No More Composter for You

Every Fall, one of my rituals is making/putting up, whatever you want to call it, applesauce. Nothing fancy, no sugar, just cooked down apples — ok maybe a pinch of cinnamon and a squeeze of lemon juice, but that is about it.

Peeling, coring and slicing alot of apples can be a pain in the neck…I mean hands. So thank  goodness for the handy old school slicer, peeler, corer all in one thing ma bob I bought at a farm stand 20 years ago. See  the picture below — this thing is da’ bomb.

The ‘Peel Away’ aka old school slicer, peeler, corer all in one thing ma bob

Serious entertainment for me I tell ya. I become completely mesmerized watching the apples become stripped of their peel and core all while being simultaneously sliced to perfection.  And the really cool thing, for me at least, is the one long curling strip of apple peel that is the result. I have always wanted to do something with the long strips of peel,  but always, into the composter they go. Okay in the past I have wrapped them into cheesecloth and then into a pot of cooking apples to give my apple sauce a lovely pink hue…well provided that apples I used were a red variety.

Not this year. No. No composting (ok some went that way).  After briefly seeing somewhere online (dang, wish I could remember now, cause I need to thank who ever posted and inspired me) I came across apple skin crisps/chips (shoot again short term memory fail and can’t recall what they were officially called). I did recall that the peels were just cooked plain, low and slow in the oven. Or that is all that I could recall. I thought I would take my inspiration one step further – add a bit of olive oil, a sprinkle of cinnamon and sugar, and then into the oven low and slow. Opps, impatient girl that I am (what, I had an apple crisp waiting to go into a hotter oven and I only have one) bumped up the temp at the end, maybe took much too soon but the result? OMG. New favorite sweet snack. Gelato move over, we need to ‘break up’ for a while anyway. Crunch and sweet factor all rolled into one. Perfect. And not feeling nearly as guilty as polishing off a bowl of my ex, gelato. 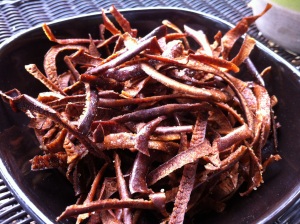 Preheat oven to 250 degrees. Carefully toss apple peel strips with oil and then cinnamon sugar. Place in a single (or close to single layer) on baking sheet. Bake in oven for at least an hour. Really depends on how crispy you like your crisps. I let them bake for two hours. Let cool completely – they seem to get crisper as they cool.

2 Responses to No More Composter for You